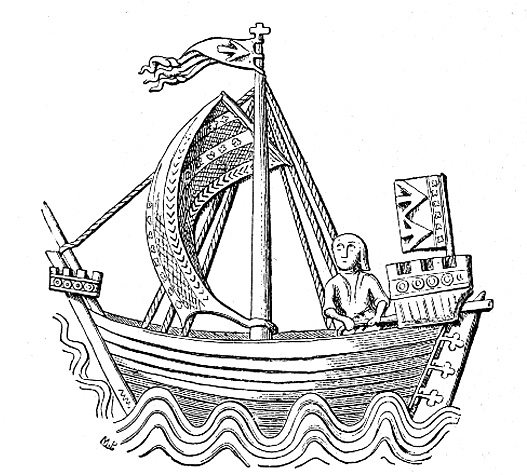 „A ship is the most honorable thing a man has ever produced.“ This saying of John Ruskin is the first thing that struck my mind the moment I saw the skeleton of the cog, a fourteen-century trading vessel, which somehow looked to me like an organic creature which had been mummified and put in the middle of the hall of the German Maritime Museum.

Moreover, the scene awakened many sleeping memories in my head, related to the stories I used to hear in my early childhood. Although the history of the cog is far distant from my own culture, for some inexpressible reason it brought to me an ancient story which is related with Mesopotamia. That is of course the Epic of Gilgamesh. There is at one of its critical sections an old myth of a great ship, built by a man called Utnapishtim, that saved the future of all humanity. And as a reward for his rescuing of the seeds of mankind, that man was given immortality, as well as a place among the heavenly gods.

Then this memory took me to another memory. That is, to the first story I ever heard in my life which is the religious story of Noah who spent many years on the mission of building a great ark in order to save everyone from the destruction.

The more I kept on staring at the cog the further I got from reality. Presently, I started remembering the Sinbad voyages. But the fact is that Sinbad’s ship–even though it is fictional–was sailing somewhere around the Indian Ocean, very far from the place in which the cog was found, on the seabed of the Weser River in Bremen. This realization brought me back to reality. And when I later told my friend about this stream of consciousness, he told me that, despite the long distance between the place of my fictional characters and the place in which the cog was found, still some scholars believe that the cog might have been built based on the famous Arabic Dhow, which somehow was derived from the old Mesopotamian vessels. Then, I thought to myself: “If I could research this topic and if I could prove it then I will be able to turn my fictional feelings into reality.” If this was correct that would mean that my first impressions about the cog were not coincidental. And that is when I decided to research the possibility that the cog might have been built based on the Arabic Dhow. However, let’s leave this topic for another future academic essay and let’s talk about the beautiful discovery of the cog.

In 1962 the wreck of the cog was found in the Weser River during some dredging operations. It was impossible to extract the ship from the river in a one piece. Thus, it was dismantled. And in order to keep the pieces from drying and shrinking they at first were kept in water basins and later they were injected with some liquid to keep them in a healthy shape. After the long and hard work of bringing back the fragments of the puzzle to their places based on photographs and on the timbers’ numbers, the reconstruction was accomplished.

The whole mission of salvaging the wreck out of the river bed and the reservation and reconstruction of the cog took more than thirty years, a hard task carried by a professional team. However, after many studies, which shed light on the incomplete appearance of the ship, it was assumed that it had been driven off its site by a flood in 1380. However, the cog was presented to the public in 2000 in The German Maritime Museum which was opened for this great event in 1975 in Bremerhaven.

Seals and other historical documents discovered show that the earliest existence of the cog was around the tenth century. However, its use became more noticeable and spread during the twelve century. But these theories were made before the finding of the cog. And the cog’s discovery changed the nature of the questions, now the cog is bringing a storm of new question marks among both academic and normal people. It is not clear whether the term ‘Kogge’ referred to a specific type of ship or to cargo ships in general. Thus, the cog discovery made the term ‘cog’ itself more problematic.

Seeing the wreck of the ship erected in the middle of the Maritime Museum where on the other side one can see the water of the river, is more than magical. One cannot help imagining the old crew of the ship trying to complete their cog in order to start a journey from Bremen River to somewhere, who knows where, maybe to Mesopotamia?

The crew must have been saddened when their cog was sunk before inaugurating it, not realizing that by so doing they have kept an invaluable treasure sleeping in the seabed for Bremen to discover later. So, unlike the early stories in which ships saved men, here we have the situation which is the other way around.

The magnificence of the Bremen Cog is not only limited to its ability to bring poetic emotions or just to awaken a nostalgic feelings of the medieval times, but it also provides scientific evidence in the face of those who doubted the assertions made about such ships, which has a good claim to being one of the oldest medieval ships.

As I mentioned before, the cog was the reason of the opening the Maritime Museum, and there is much to say about the other things to be seen in the other areas of the museum, many of them connected with the cog. The expert staff of the museum have tried to make every tiny detail about the cog available to the visitor. They started from the very first rumors among people of Bremen at 1962 talking about finding something under the water, which were circulating even before the start of the salvaging of the cog. In other places of the museum they put many objects, pictures, movies, audible recordings, touchable displays, smellable items from the ocean, maps, tools, etc. related with the cog and with the history of Bremen at that time, all of which give a sensual feeling of going back in time and feel how the situation was back then in 1380 when the cog was built. This atmosphere is easy to feel, and if you are as over-imaginative as me, it will not only take you back to Bremen of 1380 but it will even take you to the Mesopotamia of 3000 BC.!

Ebrahim al-Khaffaf is visiting the DSM for two months as a part of his master study in History of Science at FSMVU in Istanbul. You can contact him under abraham_salim84@yahoo.com.